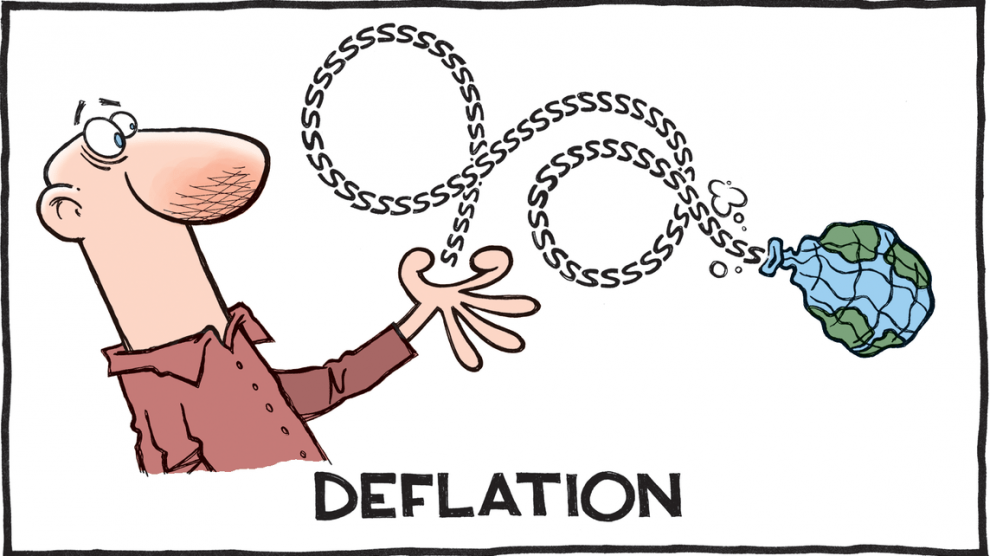 Bitcoin's monetary policy is simulated to resemble precious metals, restricted supply without fractional reserve. 21 million is the maximum number of coins that will ever be created. Bitcoin is not a traditional currency, it is programmable money subdivided by 8 decimal points., or one-hundred million smaller units (satoshis) in every bitcoin. That could fit the world economy. Where supply is restricted, inflation is a problem, deflation is not. "Deflation" is a scary term for economists who now deal with currencies that are fractional reserve; deflation only occurs through the government, which has the authority to create an infinite supply, recession and depression. Therefore you only see it in places where there's catastrophic collapse in demand. In a market where you have deflation that is caused by improvements in efficiency, you get falling prices/cheaper goods. In a world where every other currency is printed to infinity, Bitcoin is interesting because it isn't.

You have been talking about the need for a bitcoin, which is the demand side. What are the plans to grow the supply of bitcoin until it satisfies those 80% of people who are unbanked? Because $1 trillion in value is less than 1% of 1% of the physical needs.

Bitcoin’s monetary policy is very specific. It is designed to simulate precious metals. It is a system of restricted supply without fractional reserve. It is a fully backed currency where 21 million is the maximum number of bitcoins that will ever be created.

Now if you hear that, you must ask: “21 million coins, how can that possibly fit the world economy?”

The point is, bitcoin is not a traditional currency. Bitcoin is a programmable currency. That 21 million is subdivided to eight decimal points, which means there have 100 million smaller units in every bitcoin.

One bitcoin has a 100 million satoshies, which is the smallest unit you can have. We can divide it even further than that. You can cut it into smaller and smaller pieces. You can do that though other blockchains or offchain like layer 2 solutions.

If you look at the supply in terms of 21 quadrillion monetary units, that could fit the world economy as it is today, right? With the approximate value of one hundreth of a dollar per unit, for 21 quadrillion units. That would give you $210 trillion worth of bitcoin. So if each satoshi was worth one penny ($0.01), then the value of the 21 quadrillion total supply of satoshis would be worth $210 trillion.

The conclusion appears that if you just decide to cut it up, it would create the opposite of inflation. If you cut it up, then what happens is you will have a deflationary effect. If you have a relatively fixed supply with increasing demand, that drives up the price of the currency up.

Deflation is a very scary thing, especially if you are an economist because under traditional economics,

You have a government that has the ability to theoretically create an infinite supply. What does it take for the demand of a currency to collapse so far below the supply, that even an infinite supply creates deflation?

The answer is simple: you have to have a catastrophic collapse in demand; not just a recession, but a full blown depression.

In systems of money where you can just keep printing supply, inflation is a problem. Deflation is not a problem.

If you can keep printing money, someone will spend it. That is not the problem. Why would no one spend it? Because the economy has collapsed completely.

So the only places in the world we know of now where we see deflation as a monetary phenomenon are places where you have a catastrophic collapse in demand. Japan is a great example of that, now in its 25th year of deflation.

In a few other countries, they first dip into a deflationary period before hyperinflation. Everybody keeps their money under their mattress, then there is a slight increase in positive sentiment, the money comes out into the market again, and then it turns into Weimar Republic. Hundreds of billions of trillions of marks just for a cup of coffee.

Deflation as a monetary phenomenon is only bad when you have an infinite supply. But it is not necessarily bad if the supply is restricted.

than the phone you bought few years ago?

My first cellphone was bigger than the brick. It had eighteen minutes of talk time before the battery would run out. I had paid almost £1,000 to buy it. Today, modern phone runs for about two days. It has more processing than a thousand of the first supercomputers, and cost about $500. What is that called? Deflation. That is price deflation in action. Currency can buy more product and has more value in the market than before. Deflation is great. With falling prices for laptops and other products, we love it. For businesses that are efficient, we love it.

When deflation is caused by improvements in efficiency and a constrained supply, not by a collapse in demand, we love it. Deflation is not necessarily a problem.

On the other hand, we don’t know the long-term effect. In cryptocurrencies, there is a lot of competition in monetary models. If you don’t like Bitcoin’s monetary model, you can find others with different models, such as higher levels of inflation.

The monetary policy of cryptocurrencies is a very interesting characteristic… because in a world where every other currency is printed to infinity, bitcoin is the only one that isn’t. That is a good thing, or at least it is a different thing so it is counter-correlated.

To an investor, something that is counter-correlated is very interesting to have. I can always get inflation-based currencies elsewhere.

When you see things like Brexit happen, or sudden devaluations in the yuan, three things go up. Yen (because it is deflating), gold, and bitcoin. Fancy that! That is a weird situation in monetary politics. Everything else is moving in the opposite direction.

But I am not an economist. I will disclaim that.