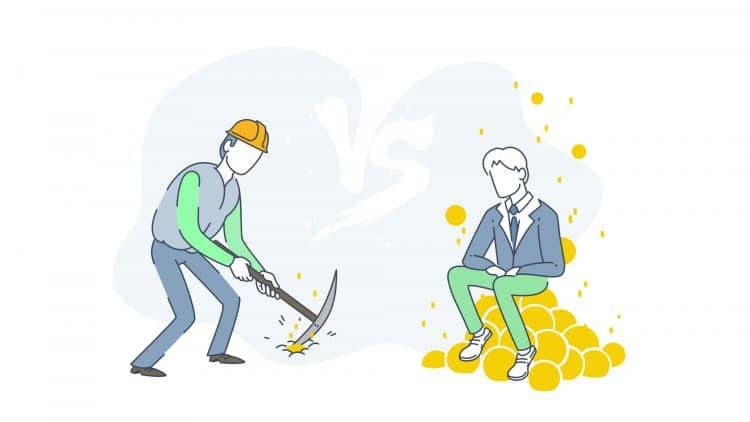 Security of proof-of-work versus proof-of-stake. Proof-of-work, i.e. thermodynamic cost, is not a waste. Proof-of-stake secures transactions going forward but does not provide robust immutability. Proof-of-work relies on resources outside the network (electricity). Both systems are vulnerable to DoS attacks if you get the majority of the consensus mechanism, but getting a majority of the intrinsically-native blockchain capital (ex. through a smart contract bug) is a lot easier than getting a majority of the mining infrastructure and widely distributed sources of electricity. The security differential is worth it.

Some are saying that proof of work is not a waste, because it’s so secure, and then that’s the only option that gives that. But if proof of stake is let’s say not as secure but almost as secure, but secure enough.

Let me paraphrase a bit. If I say proof work is not a waste, what if proof of stake achieves fair approximation of the level of security, without that electricity cost? Will it then not eclipse proof of work?

With proof of work you use it to make sure that the security of the transactions going forward is correct, with the proof of stake can not give you robust immutability.

The reason it cannot give robust immutability, is because what you are staking is the currency that’s on the network, and if you have control over the network… you can issue more of that, you can do many things to violate the rules in order to compensate for the loss that you suffered.

Whereas, if you burn the electricity outside of the network, you can’t get that back by rewriting the blockchain.

With proof of stake, If I have a 51% of coins I can use them to get to even more coins, and that will destroy value of all coins. With bitcoin, if I invest enough capital and energy to get to 51% hashing power, I can stop the network or misuse the network and destroy value that way as well.

But in that case I can change only the future, but not the past.

I could do denial-of-service. Both systems are susceptible to service if you get the majority of the consensus mechanism.

So that’s the problem, the problem of using something that is intrinsically native to the blockchain. I cannot simply steal the mining equipment that is out there because it’s tangible. And I can simply access these enormous amounts of energy overnight. These take a long time to marshal these energy contracts, which makes it more robust to that kind of interference.

How much more is that security differential worth it? I don’t know. I don’t know if that is enough. Maybe it is. I think this is a unique platform with a unique set of application characteristics and utility as a service… that is not only worth spending that amount of electricity, which will create a monuments to immutability.

What can you do when you have an immutable historical record that you couldn’t do before, have no thought of doing it before, but you can now.

What Will Politics & Bitcoin be in 30-40 years – The Networked vs. the Landlocked
Can The Immutability Of Bitcoin Be Transferred To Other Payment Systems?