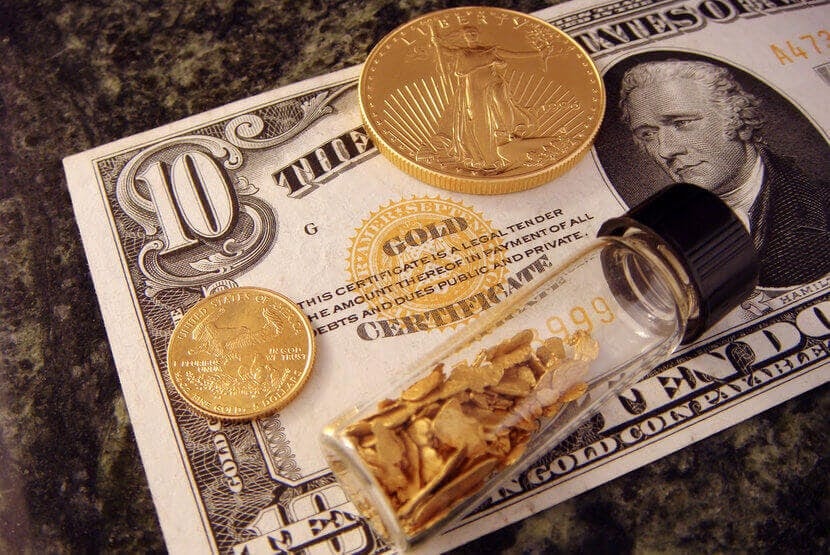 In the last post, we learned about the Bretton Woods international monetary system that was developed after World War II. The forty-four countries who were part of the system agreed to keep their currencies fixed to the dollar, and the dollar was fixed to gold at $35 per ounce. Countries settled their international trade balances in US dollars.

The US had the sole responsibility of maintaining the dollar price of gold at $35. This means that if a country ever needed to send dollars back to the US, the US had to convert the dollars to gold at a price of $35 per ounce. In order to maintain the $35 exchange rate, the US would adjust the supply of dollars. For example, if the exchange rate ever dipped below $35, the US printed more dollars so that the value of gold relative to the dollar appreciated.

Initially, the system seemed to work well. However, this started to change in the 1960s when European and Japanese exports became more competitive with US exports. As the US share of world output started to decrease, it reduced the demand for dollars. As a result, more countries wanted to convert their dollars to gold.

Around this time, the US increased its military spending and foreign aid, which resulted in a large supply of dollars around the world. Meanwhile, the supply of gold the US held only increased marginally. As a result, there were now more foreign-held dollars than the United States had gold.

Countries started to lose confidence in the US government’s ability to meet its obligations. The US became vulnerable to a run on gold, threatening both the dollar’s position as a reserve currency and the overall Bretton Woods system.

It started to become clear that there was a broader structural problem with the Bretton Woods system. Originally, the dollar served as the reserve currency because of its global importance as a medium of exchange. However, once the US started to consistently run into account deficits, countries lost faith in the dollar as the stable reserve currency.

These were many efforts to come up with temporary fixes to the Bretton Woods system.

For example, in March 1961, the US Treasury’s Exchange Stabilization Fund (ESF) started to intervene. The ESF bought and sold foreign exchange currency to stabilize the exchange rate market. While the intervention worked for a brief period of time, the Treasury didn’t have enough funds to save the dollar.

The Federal Reserve tried to limit the conversion of gold by giving foreign central banks “swap lines” for their unwanted dollar reserves. In March 1962, the Federal Reserve established its first swap line with the Bank of France, and by the end of that year, swap lines had been set up with nine central banks (Austria, Belgium, England, France, Germany, Italy, the Netherlands, Switzerland, and Canada). Altogether, the lines provided up to $900 million equivalent in foreign exchange. It swiftly became clear that the need for the swap lines signaled a fundamental problem in the US monetary system.

As more countries started to lose confidence in the system, gold runs began. For example, a gold run in London sent the price of gold to $40 an ounce on October 20, 1960. To quell the run, a group of eight central banks (Great Britain, West Germany, Switzerland, the Netherlands, Belgium, Italy, France, and the United States) formed the London Gold Pool in November 1961. In an attempt to preserve the price of gold at $35 an ounce, the group agreed to pool gold reserves in order to be able to meet the increased demand for gold. The pool was successful for six years, but the gold crisis returned after France withdrew from the pool. The pool collapsed in March 1968.

The seven remaining members of the London Gold Pool then agreed to create a two-tiered gold system, where they agreed to use their gold only in settling international debts, but would not sell gold on the private market. This was another temporary fix that didn’t solve the problem.

While the United States was facing this dilemma in the international economy, it was simultaneously facing a growing problem of inflation in the domestic economy. This became known as the “Great Inflation.”​

What caused the Great Inflation?

​Let’s look at a couple of the major factors.

This large-scale fiscal spending caused a lot of strain on the economy. Moreover, to fund war programs, the Federal Reserve printed more dollars than it had gold backing.

In an ideal scenario, the Fed would raise interest rates to cool the overheated economy down. However, it didn’t want to intervene with the Treasury’s war-funding plans. As debt continued to rise, the Federal Reserve’s decision to keep interest rates steady only exacerbated the problem.

The pursuit of full employment

Another dilemma that led to the rise of inflation during the 1960s and 1970 was the pursuit of full employment. After World War II ended, Congress wanted to implement policies that would promote economic stability and avoid ever returning to the Great Depression’s unprecedented high unemployment rates. This concern led to the Employment Act of 1946, which declared that it was the federal government’s responsibility “to promote maximum employment, production, and purchasing power.” This required fiscal (i.e. government) and monetary (i.e. central bank) policies to coordinate with one another.

In order to meet the requirements of the Employment Act, the Fed relied on the concept of the “Phillips curve,” which is an economic concept that states that inflation and unemployment have a stable and inverse relationship. The theory posits that with economic growth comes inflation, which in turn should lead to more jobs and less unemployment.

​
However, economists strongly warned against it.

In other words, if there is an increase in aggregate demand, then people will demand higher nominal wages. When they receive higher nominal wages, they work longer hours because they feel real wages have increased based on last year’s price expectations. Hence, there is an increase in employment. However, this increase in aggregate demand also causes inflation, and so when we eliminate the inflationary factor, real wages stay the same. When people realize this fact, they change their price expectations and no longer supply extra labor. Real output then returns to its original level. Therefore, unemployment remains unchanged, but at a higher inflation rate. Or worse, unemployment increase and inflation increases (i.e. Stagflation).

In short, the trade-off between lower unemployment and more inflation was a false bargain. Instead, lower employment would require maintaining ever higher inflation.

By the end of the 1969-70 recession the unemployment rate had climbed to 6%, and inflation, as measured by the consumer price index, was 5.4%.

With inflation on the rise and a gold run looming, Nixon’s administration coordinated a bold two-part plan in November 1971.

The first order of business was to close the United States’ gold window. Foreign governments were no longer allowed to exchange their dollars for gold.

Nixon’s actions sent shock waves through the international community. Many foreign currencies started to appreciate relative to the dollar. Countries around the world feared that international monetary relations would collapse, resulting in a serious recession.

The second part of Nixon’s order was to put a 90-day freeze on wages and prices. The goal of these wage-price controls was to artificially hold down inflation for a time. It was an attempt to bring down inflation without increasing the unemployment rate or slowing the economy. In addition, a new 10% import surcharge on goods ensured that American products would not be at a disadvantage because of exchange rates.

Shortly after the plan was implemented, the growth of employment and production in the United States increased. As a result, inflation stopped rising during the 90-day freeze.

However, the fundamental problem in the economy at the time was that there was too much aggregate demand, and wage-price controls didn’t solve that. Instead, it only led to more problems, and inflation eventually began to rise again after the 90-day freeze.

A few months later, the Smithsonian Agreement was another attempt to maintain pegged exchange rates. The United States agreed to devalue the dollar against gold by 8.5% to $38 per ounce. Other countries offered to revalue their currencies relative to the dollar. The net effect was roughly a 10.7% average devaluation of the dollar against the other key currencies.

The Smithsonian Agreement did little to restore confidence in the Bretton Woods system. European central banks continued to accumulate large amounts of unwanted dollars, which further stoked inflationary pressures. Germany and Japan started to restrain financial flows in and out of their countries, and then other countries followed suit.

With the last link to gold severed, most of the world’s currencies, including the US dollar, were now completely unanchored. This was the first time in history that most of the money of the industrialized world permanently moved to a paper money standard.

Another key factor that exacerbated the Great inflation was the energy crises at the time that increased oil costs and halted US growth. The first crisis was an Arab oil embargo that began in October 1973 and lasted about five months. The embargo banned the US from importing oil from Organization of Arab Petroleum Exporting Countries (OAPEC) countries. As a result, there were severe production cuts that altered the world price of oil. Crude oil prices increased by four times. Then a second energy crisis happened in 1979, which tripled the cost of oil.

As Arthur Burns, the chairman of the Federal Reserve at the time, explained in 1974, the

When OAPEC cut oil production, prices had to rise because the American oil industry could not respond by increasing its own oil supply. During this period, OAPEC countries gained a larger percentage of the world oil market, eventually giving them a much larger influence over the price of oil.

Moreover, the devaluation of the dollar that was happening during this period further exacerbated the rising price of oil. Since the price of oil was quoted in dollars, the falling value of the dollar effectively decreased the revenues that OAPEC nations were seeing from their oil. So OAPEC nations started to price oil in terms of gold instead. When the Bretton Woods Agreement ended, the price of gold rose to $455 an ounce by the end of the 1970s. This drastic change in the dollar’s value is an undeniably important factor in the oil price increases of the 1970s.

All of these different causes for the inflation can be categorized as either “demand-pull” and “cost-push.”

The greatest failure of American macroeconomic policy in the postwar period

During this time, business investment slowed, productivity fell massively, and the nation’s trade balance with the rest of the world worsened. Many surveys showed that public confidence in the economy and government policy in the latter half of the 1970s was at an all-time low because of inflation.

The Great Inflation is an example of a time when the Fed failed to meet its mandate to keep inflation at steady and moderately low levels. It revealed deeply ingrained problems in the United States’ economic system. So what happened next?

Well, the system was “broke,” and something had to fix it. In the next post, we’ll learn about a series of reforms to the Federal Reserve’s policies.

How Should The Fed Have Responded During The Great Inflation?
The Invention Of The Bretton Woods System (a plan to fix the global economy after WWII)