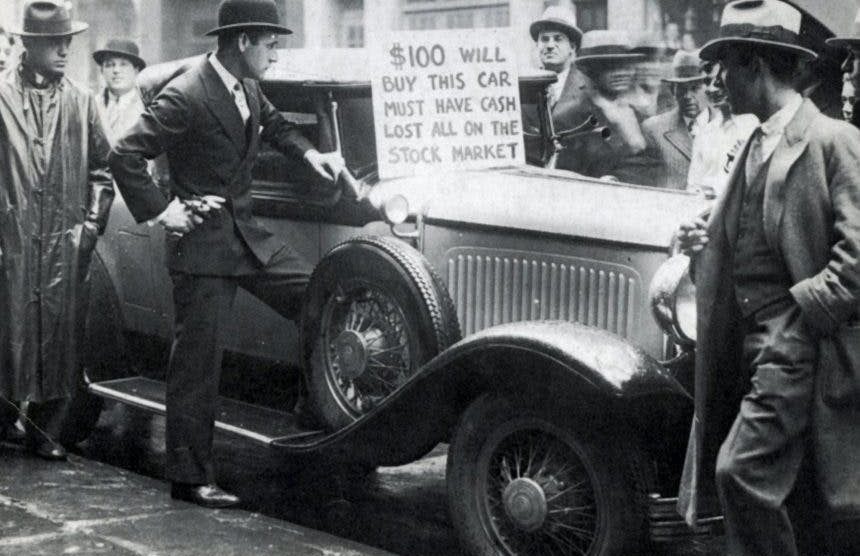 We’ve been taking a journey through history, learning about the events that led up to the creation of the Federal Reserve in 1913, as well as the Fed’s role in maintaining our nation’s economic stability.

Ever since the creation of the Fed, there have been a series of booms and busts that tested its effectiveness and resilience. The first of many such challenges is the stock market crash of 1929.

In this post, we’ll talk about the series of events that led to the stock market crash of 1929 and understand how the Fed responded to these events.

If you lived during the prosperous 1920s, your worldview was full of glory and exuberance, a la Great Gatsby. During the Roaring Twenties, share prices rose to unprecedented heights on the NYSE (New York Stock Exchange). The Dow Jones Industrial Average increased six-fold, and people believed this would be a permanently high plateau. As a result, certain parts of the nation felt like they were in a constant state of celebration. Party!!

The high didn’t last long though. The epic boom ended in a cataclysmic bust, destroying the livelihood and lives of millions of Americans, regardless of social status.

On Black Monday, October 28 1929, the Dow Jones Industrial Average declined nearly 13%. By mid-November, the Dow had lost almost half of its value. The slide continued through the summer of 1932, when it closed at 89% below its peak. That ended the party pretty quickly.

Initial attempts to alleviate the 1929 crash

The crash of 1929 presented an opportunity for the Federal Reserve to act. After all, the whole reason the Fed was created was to deal with situations like this.

The Fed took a two-part approach:

Part of the reason for the financial euphoria of the 1920s was that banks were lending to stock speculators using “call loans.” Thus, the Federal Reserve Board asked reserve banks to deny requests for credit from banks that loaned funds to stock speculators. It also publicly warned people of the dangers of speculation.

The Fed raised the discount lending rate. This is the interest rate that banks pay to borrow money from the Federal Reserve. By doing this, they make it more expensive for banks to borrow from the Fed, so that banks in turn reduce how much they are willing to borrow. This means they also can’t lend money as easily to consumers. Moreover, by reducing the discount lending rate, the Fed indirectly raised interest rates that everyone else (i.e. people and businesses) had to pay to borrow money. Because it is more expensive for banks to borrow from the Fed, the rates that the bank charges its customers will also be higher.

The hope was that raising the discount lending rate would help slow the stock market speculation because there would no longer be access to cheap capital.

As people started exiting the stock market, they moved their funds into New York City’s commercial banks. As bank deposits into these banks increased, the reserve requirements for the banks also went up (recall that when you deposit money with a bank, it is required to maintain a portion of that money in reserve).

However, these banks had previously taken on many stock market loans and so were already running tight on reserves. To add to the mess, depositors who were worried about the stock market were withdrawing cash, and other banks around the country were trying to purchase loans from the more reputable NY banks to stay afloat. All of this left many NY banks short of the required reserves.

Furthermore, it assured commercial banks that it would supply the reserves they needed. This increased the total reserves in the banking system, which in turn relaxed the reserve constraint that NYC banks were facing. The goal was to allow financial institutions to stay open during the crisis so that people wouldn’t go into further panic mode. This also prevented banks from raising short-term interest rates too high (which would only make the recession worse because such raises make borrowing more expensive).

The New York Fed was able to save the commercial banks (sound familiar?!), but the stock market crash still hurt commerce, big-time. Manufacturing was down. Investors (maybe better word – speculators) were scared. People lost their life savings, feared for their jobs, and worried whether they could pay their bills.

People stopped buying big-ticket items like automobiles. Companies like Ford had less demand. As a result, unemployment rose, and the contraction in the economy got worse.

The downturn that began in the summer of 1929 lasted for fifteen months.

By the fall of 1930, there was finally some hope and expectation of economic recovery.

In November 1930, however, a series of banking panics and failures turned what could have been a short, sharp recession into the beginning of the Great Depression…

The Great Depression
What Does The Federal Reserve Do?