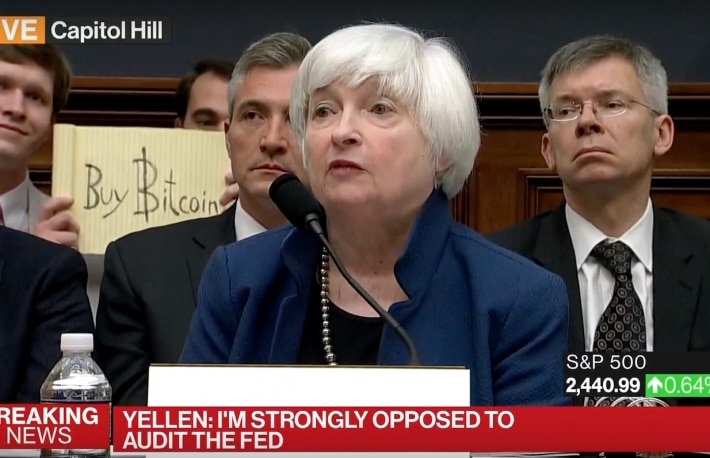 Many of you may have heard the news about Janet Yellen saying that Bitcoin and cryptocurrencies are mostly used for illicit activities, like financing terrorism.

A lot of Bitcoiners are upset about it and claiming that the US dollar is used for terrorist financing as well. Sure, that is very true, but given that bitcoin is an open and censorship-resistant digital currency, shouldn’t we expect Bitcoin to be used for terrorist financing? It seems obvious that it would be. And if Bitcoin was NOT being used for illicit activity, then it probably is not meeting its own standards to be censorship-resistant.

In short, if we are going to build a tool, we should expect that the tool will also be used for bad things. The hope is that over time, the tool is used for more good things than bad things. Otherwise, we have failed.

Something for you to think about…

With that, we will move onto the next lesson: The Great Moderation.

In the previous posts, we’ve discussed factors leading up to the Great Inflation which, as you know, was a period of turbulence in the US during the 1960s and 1970s. So what of the calm after the storm? Was there any? Fortunately, yes! Under the chairmanships of Paul Volcker (ending in 1987), Alan Greenspan (1987–2006), and Ben Bernanke (starting in 2006), there was a decline in the volatility of GDP growth and inflation. This led to the “Great Moderation,” a period of relative economic calm from the mid-1980s to 2007.

Unfortunately… yes, you can probably see where this headed… the 2007–2008 financial crisis ended the calm of the Great Moderation. We’ll get to that in the next post, but first, let’s look at the Great Moderation itself. How did this time of economic calm happen? What can we learn from it?

Volcker comes to the rescue

When Chairman Paul Volcker took office, inflation was in the double-digits. Volcker promised to make lowering inflation his top priority.

His plan was to tighten monetary policy in order to reduce the money supply, which would slow down the economy and help fight inflation.

“To break the inflation cycle, we must have credible and disciplined monetary policy.” — Paul Volcker

Typically, the way the Fed tightens monetary policy is by increasing the interest rate at which it lends to banks (i.e. Fed fund rate). However, Volcker felt this approach was no longer appropriate. Instead, he proposed a way of managing the volume of bank reserves in the system instead of trying to manage the day-to-day level of the federal funds rate.

“By emphasizing the supply of reserves and constraining the growth of the money supply through the reserve mechanism, we think we can get firmer control over the growth in money supply in a shorter period of time. But the other side of the coin is in supplying the reserve in that manner, the daily rate in the market…is apt to fluctuate over a wider range than had been the practice in recent years.”

By focusing on controlling the reserves in order to control the country’s monetary supply, the federal funds rate reached a record high of 20% in late 1980 (compare this to the 0.25% Fed Funds rate today!). Why did the Fed funds rate increase so much?

It’s the law of supply and demand. If the supply of money that the Fed is allowed to lend is limited based on the supply of reserves in the bank, then any additional demand will cause prices to increase.

Since the Fed funds rate was so high, it pushed the economy into a severe recession. Businesses experienced liquidity problems, and unemployment rates continued to rise. Volcker was well aware of this risk and warned that such an outcome was possible:

“Some difficult adjustments may lie ahead.”

The general public was less than happy, to put it mildly. The high interest rates affected people who had been saving to buy homes and cars for many years. Suddenly, people were unable to fulfill these dreams because of high interest rates. Car dealers sent coffins full of the keys of unsold cars to the Fed’s headquarters. Farmers started protests. Things were getting ugly.

The Fed was blamed for supporting big businesses and instead of small businesses and farmers. Conservative Congressman George Hansen stated during a 1981 hearing that…

Even President Reagan did not approve of Volcker’s new approach:

“What I am suggesting is that if (money supply growth) stays here, you’re going to have a severe recession”

Volcker defended the Fed’s actions in his 1981 testimony to the Senate Committee:

“I am wholly convinced — and I think I can speak for the whole Board and whole Open Market Committee — that recognizing that that objective for unemployment [4 percent] cannot be reached in the short run — the kinds of policies we are following offer the best prospect of returning the economy in time to a course where we can combine as full employment as we can get with price stability. I bring in price stability because we will not be successful, in my opinion, in pursuing a full employment policy unless we take care of the inflation side of the equation while we are doing it. I think that philosophy is actually embodied in the Humphrey-Hawkins Act itself. I don’t think that we have the choice in current circumstances — the old trade-off analysis — of buying full employment with a little more inflation. We found out that doesn’t work, and we are in an economic situation in which we can’t achieve either of those objectives immediately. We have to work toward both of them; we have to deal with inflation. And the Federal Reserve has particular responsibilities in that connection.”

Volcker felt that changing course now would only make matters worse, so he stuck to his original plan. It got to the point where various congressmen wanted Volcker impeached. Even with such threats, Volcker held his ground

And guess what? His strategy actually worked!

When Chairman Volcker left his post in 1987, the inflation rate was around 3–4%.

Following the Volcker disinflation, both output and inflation were much less volatile from the mid- 1980s through 2007 (primarily Chairman Greenspan’s term).

Once inflation was under control, there was so much improvement in the economy in the period that followed from the late 1980s to 2007, that this period became known as the “Great Moderation.”

“An environment of greater economic stability has been key to impressive growth in the standards of living and economic welfare so evident in the United States.” — Alan Greenspan

What caused the Great Moderation?

To this day, there is no consensus on what exactly caused the Great Moderation. People attribute it to a mix of factors, which we will briefly discuss next.

1) Structural changes in the economy

Some economists think that the reason for the steady period of economic growth was structural. A macroeconomic shift from a manufacturing-based economy (more volatile) to a services-based economy (less volatile) led to reduced volatility. Additionally, better business practices like “just-in-time” manufacturing could have helped reduce the volatility in the inventory cycle. And the rise of information technology allowed companies to produce goods more efficiently, which reduced volatility in production (and hence, in real GDP).

Another structural factor could have been that the deregulation of many industries allowed various economies to be more flexible and permitted them to adjust more smoothly to shocks. Lastly, more open international trade could have helped stabilize the economy.

In the early 1990s, the Fed started following the Taylor Principle, named after economist John B. Taylor. Under this rule, the central bank tightens monetary policy when GDP is above its potential or inflation is high and eases policy in the opposite case. In effect, the Fed would constantly be monitoring the economy and making policy changes, instead of only making changes in an emergency.

Reducing the episodes of “go-stop” policies created a more systematic monetary policy, which could have been another factor that helped reduce volatility.

Another big structural change was the transparency the Fed now had in communicating its monetary policy. This helped them better anchor inflation expectations, and there was less chance for the public and financial markets to be surprised. Baking in the monetary policy led to less volatility (theoretically, at least).

Luck is another possible explanation. Perhaps it was just that the United States was hit by less severe shocks during this period, compared to the adverse shocks of the 1960s and 1970s (e.g., the oil shocks of the 1970s).

Financial stresses did occur (for example, the savings and loans crisis of the 1980s; the Latin American debt crisis of the 1980s; the failure of Continental Illinois Bank in 1984; the stock market crash of 1987; the Asian financial crisis in 1997; the collapse of Long-Term Capital Management in 1998; and the dot-com crash in 2000, all of which we will learn about in a future post), but they were not as severe. However, perhaps it was that these shocks were less severe due to the structural and policy changes we discussed above, which allowed the economy to remain stable? This remains a hotly debated topic.

In the next post, we will take a little tour through some of the “minor” shocks that happened throughout the 1980s and 1990s. I will leave it up to you, the reader, to figure out whether you believe the shocks were minor enough not to disrupt the economy, or whether you believe that the economy had become more resilient and so any shocks, regardless of intensity, did not cause a meltdown!