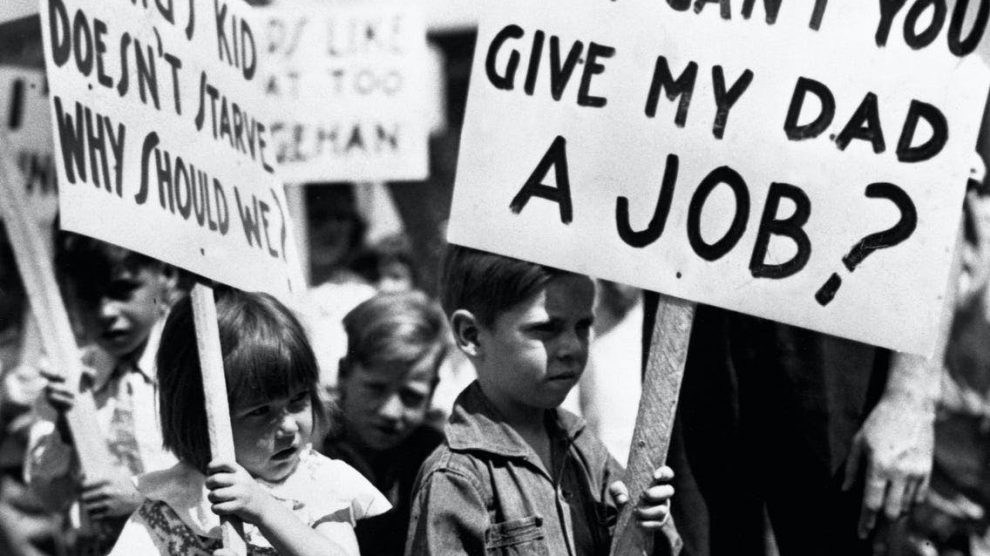 You might be wondering why I am spending so much time explaining the history of banking. To some of you, this might even be boring or feel unnecessary.

Without further ado, let’s move onto the next lesson!

Where we last left off, the effects of the stock market crash of 1929 seemed to be easing, and people were beginning to feel safer about predicting a recovery. Thoughts of Roaring Thirties may very well have danced in people’s heads, but they were not to be.

In November 1930, the double-whammy punch of banking failures and subsequent panics heralded the beginning of the Great Depression. And at that point, friends, the party was well and truly over.

As you’ll recall, there was a point in United States history sans central banks, and that era was a chaotic scene, discussed in previous posts (Quick summary: constant bank failures = constant financial panics).

Then the Federal Reserve system was established, specifically to prevent such economic messes and to hopefully get the country on more stable economy footing. Reread the previous post on a primer of the way the Fed operates.

One big caveat, though… not all banks belonged to the Federal Reserve system. In the early 1930s, about 8,000 banks did while 16,000 others didn’t. These so-called “nonmember banks,” operating outside of the Fed’s safety net, carried on similar practices to those that had existed in pre-1913 US (i.e., pre-Fed).

As you can imagine, because there were still so many nonmember banks, the banking system in the US was still not as resilient as it should have been. The nonmember banks had a number of vulnerabilities, including:

A deeply rooted issue stemmed from how nonmember banks accounted for checks. A check, as you might know, is a little slip that orders a bank to pay a specific amount of money from one person’s account to another person’s account based on the name the check is issued to.

Technically, if person A writes person B a check, then the amount of money in person A’s account should be decreased, while the amount of money in person B’s account should be increased. That makes crystal clear sense, right? Money goes out from one account – bank balance lowers; money enters another bank account – bank balance rises. However, there is a period between the time a check is signed and the time a check is deposited. When the check is in this transitionary phase, it is said to be “floating.”

In the years leading up to the Great Depression, banks had an unfortunate practice of counting floating checks as part of BOTH bank cash reserves – the one in which the check was deposited and the one on which the check was drawn. In reality, however, the cash should only have been counted for one bank.

These erroneously double-counted reserves were known as “fictitious.” The quantity of fictitious reserves rose throughout the 1920s and peaked in 1930. You’ve probably guessed by now that the banking system as a whole had less real reserves available than it was aware of, which became an issue in times of panic.

Issue #2: Inability to mobilize bank reserves in times of crisis

Another bad practice among nonmember banks was that they kept a small portion of their reserves as cash in their vaults, but the bulk of their reserves were deposited in banks that belonged to the Federal Reserve system.

Obviously, this was an unsustainable pyramid if there ever were a crisis. For example, if there was a panic and people rushed to withdraw funds en masse, then nonmember banks would likely not have enough cash in reserve to meet customers’ demands. The nonmember banks would then have to turn to the banks that had deposits protected by the Federal Reserve’s safety net, but these banks might be getting requests from multiple nonmember banks at the same time.

Even worse, these Federal Reserve banks might then face a liquidity crisis themselves because of all the customers panicking, wanting their cash back. One bank might turn to another member bank for assistance, but the next Federal Reserve bank down the road also might not have enough cash to cover the crisis, so it might not respond to the request… you can see where this is leading.

Because of systemic issues like this, many banks started to fail.

The systemic failures caused a cascade of bank failures in 1930. Panic spread from town to town and within a few weeks, hundreds of banks suspended operations, a majority of them ending up liquidating.

Then the panic spread to much bigger and more influential banks. For example, the fourth-largest bank in New York City, the Bank of United States, failed. Another big institution, Nashville bond-trading house Caldwell & Co, failed.

Regions outside of NYC, including Atlanta, Chicago, and St. Louis, also had similar panics.

Logically speaking, in a crisis like this, credit creation slows down tremendously because banks in trouble have no choice but to increase prices to try to stay afloat.

Not only did credit creation contract significantly as a result of the economic downturn, but there was also deflation because banks were trying their best to accumulate reserves while, simultaneously, the public was trying to hoard cash. Of course, if the public hoarded cash, then bank deposits lessened. But if banks managed to accumulate reserves, that then reduced the proportion of deposits they were willing to lend out.

Together, the hoarding and the accumulating of reserves reduced the national supply of money. This meant people couldn’t spend as readily, which caused the prices of goods to go down, starting a deflationary cycle. If this does not sound right – less money and lower prices, you have to understand that entrepreneurs were fighting to sell their goods and services and were competing fiercely for that little money afraid people were ready to spend.

This deflation wrecked the economy. Banks and businesses went bankrupt. The public was not consuming goods. Unemployment increased. The economy was in tatters, to put it mildly.

Moreover, countries around the world were also going through financial crises at the same time, which indirectly affected the US because of the international gold standard. All of this further exasperated the deflationary feedback loop of the Great Depression.

Something had to be done…

In 1932, President Herbert Hoover signed two pieces of legislation with the goal to reform the structure of the Federal Reserve so that it could come to the rescue in moments of such dire need.

1) The Reserve banks now had authority to lend to member banks on assets not otherwise eligible for discount (i.e., on a wider range of assets). This required both the approval of five members of the Federal Reserve Board and a higher interest rate.

As noted by President Hoover:

After the act was passed, the Fed launched a massive expansionary program. It used its newly enacted powers to purchase over $1 billion in government securities within a span of three months. This increased the money supply, which offset the economic contraction that was happening due to deflation.

By the summer of 1932, prices of commodities and securities started to return to pre-depression levels. Industrial production began to recover. It seemed like deflation had ended and the economy was headed in the right direction. Good news, right?

Except, it wasn’t good news!

In the summer of 1932, the Federal Reserve stopped its expansionary policies. As soon as the life support came off, the monetary system began to collapse once again.

Foreign and domestic holders of US currency lost faith in paper money and began redeeming dollars as fast as they could.

On March 1st 1933, George Harrison, president of the Federal Reserve, sent an urgent message to Meyer and Secretary of the Treasury Ogden Mills: “The New York Reserve Bank’s gold reserve has fallen below the legal limit.”

Harrison felt that the best course of action was to declare a national bank holiday that “would permit the country to calm down and allow time for the enactment of remedial legislation.”

There was some opposition among members of the Fed to a bank holiday because they felt it would hurt their prestige. In a meeting with New York governor Lehman, they declared they “would rather stay open and take their beating.”

However, given the number of bank failures, there was no other choice. At 1:00 a.m. on Monday, March 6th 1933, President Roosevelt issued Proclamation 2039, ordering the suspension of all banking transactions, effective immediately. Roosevelt had taken the oath of office only thirty-six hours earlier.

For the entire week, all banking transactions were suspended, and banks were ordered to remain closed until further notice.

Can you imagine what this did to the public perception of matters?! People had no way of knowing when, or if, they would ever see their money again.

Surprisingly, though, according to this Boston Post note, there was not much panic:

Everybody seemed to take the bank closings with good nature. Police officers on duty at the banks with instructions to inform any prospective depositors just why they could not leave their money reported that there was little or no excitement because the doors of the bank were not open. There seemed to be few who appeared for the purpose of withdrawing cash, the officers said, and many thought it was a great joke that they were unable to get into the banks for the purpose of making deposits (Federal Reserve Bank of Boston 1999, 20).

​
According to an Associated Press report:

The average citizen’s chief trouble appeared to lie in the difficulty of cashing paychecks. Stores generally extended credit more liberally for household necessities. … Money orders were generally limited to $100. One company paid 25 percent for incoming money orders and gave checks for the balances. Railroad companies took emergency action, announcing broadened credit and stating that travelers would not be left stranded anywhere because of banking difficulties (Federal Reserve Bank of Boston 1999, 20).

The crisis began to subside on March 9th, when Congress passed the Emergency Banking Act. The Act allowed the Federal Reserve banks to reopen and lend “more freely” against the sound assets of those banks.

By March 13th, a majority of banks started to reopen. Thankfully, deposits far exceeded withdrawals at this stage.

The crisis was far from over – up to 4,000 banks closed forever, and full economic recovery was still years in the future. But the worst seemed to be over.

Phew! I hope you made it through the end. I left out a LOT of details for the sake of brevity, but I hope you have a better grasp of what caused the Great Depression and the initial attempts the Fed made to come to the rescue. Of course, there was a lot of work left to do to repair the United States’ broken economy.

In the next post, we’ll take a close look at the things that President Roosevelt tried to end the Great Depression. After all, he had a mandate.