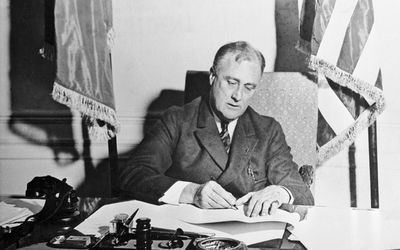 After the economic chaos we discussed in the last post, you can understand why it was clear that President Franklin D. Roosevelt (FDR) had a mandate to end the Depression. People’s homes and jobs were on the line, as was the entire country’s economy. Given the dire circumstances, the president was not afraid to be experimental. FDR tried many policies to end the Depression. While a lot of them didn’t work, two policies that did “succeed” were:

You’ll remember that in the last post we briefly mentioned that the gold standard was in part responsible for the economic depression, but we didn’t elaborate. In this post, we’ll explain further and then talk about FDR’s controversial policy to abandon the gold standard.

How the gold standard works

The United States had been on the gold standard since the 1830s. This meant that the US dollar was backed by gold.

The Fed often held more than 40% gold in reserve, just in case it needed to meet increased demand from consumers who wanted to trade in their dollars for gold.

If the Fed was ever running low on gold, it increased interest rates, which would then encourage Americans and foreigners to take advantage of earning higher interest rates by depositing their gold in banks in return for dollars. This in turn would move gold from the pockets of the public to the gold vaults of the Federal Reserve.

On the flip side, when the Federal Reserve had excess gold, it lowered interest rates. This made it less advantageous for people to lend their gold for dollars, so gold flowed out of the vaults and into the hands of the public.

The drain on gold

During the Great Depression, people started to panic. Because their faith in the financial system was shaken, both Americans and foreigners suddenly preferred holding onto gold rather than paper currency. People were afraid of a dollar devaluation during the financial crisis and started to pull their gold out of US banks.

So much gold flowing out of the banks rapidly consumed the required 40% reserve of gold. By March 1933, the Federal Reserve Bank of New York was no longer able to meet its commitment to convert currency to gold, which was the point when President Franklin Roosevelt declared a national banking holiday (discussed in the last post).

As we learned there, this brief shutdown temporarily eased the system, but it was not a permanent solution to end the Great Depression. What came next was a series of changes to how the gold standard worked in the United States.

There were three phases to FDR’s new gold program.

President Roosevelt suspended the gold standard. This meant he prohibited the Treasury and banks from converting currency and deposits into gold, thereby stopping all gold outflows and exports.

By June, FDR had completely done away with gold clauses in all government and private contracts. These clauses guaranteed that contracts would be repaid in gold or in gold’s monetary equivalent.

Thus, in a matter of three months, people could no longer trade their dollars for gold AND the had no idea how much gold the dollar would actually be worth once they were allowed to trade it (if ever).

Obviously, anyone who put faith in the dollar being backed by gold was suddenly very uncertain as to whether the dollar was now worth anything but a piece of paper…

Why did FDR think this was a good idea?

The goal of these programs was to raise prices of commodities like wheat and cotton in order to counter the severe economic deflation. Devaluing the dollar would help relieve debtors and revive banks and businesses. Moreover, it would make it cheaper for foreigners to buy American goods, which would in turn encourage exports. And lastly, it would both raise prices of foreign goods in the US and discourage imports.

The third phase of FDR’s economic recovery plan began in January 1934 with the Gold Reserve Act. This was the peak of FDR’s controversial gold program. The Act did the following:

1) Ownership of all monetary gold in the US was transferred to the US Treasury.

“Monetary gold” included all coins and bullion that individuals and institutions owned (including the Federal Reserve!). The Treasury paid $35 per ounce of gold that was handed over to the Treasury. This was 70% higher than gold’s previous value of $20.67 per ounce… Geez!

2) The Treasury and financial institutions were prohibited from redeeming dollars for gold.

Instead of converting paper currency to gold coins whenever people desired to do so, now the government converted gold into dollars, regardless of whether citizens wanted to or not!

3) The use of gold within the United States was regulated.

The use, acquisition, transportation, importing, exporting, and possession of gold was now fully regulated. People no longer could use gold however they wanted to use it.

4) A new $2 billion stabilization fund was created under the control of the Treasury.

These funds came from the profits the government earned when it raised the price of gold to $35 instead of the original $20.69. The Treasury could use the Exchange Stabilization Fund (ESF) to buy or sell gold, foreign currencies, financial securities, and other financial instruments in order to control the dollar’s value and to conduct open-market operations without the approval of the Federal Reserve.

5) The president was given the right to set the gold value of the dollar.

Roosevelt’s justification for this was that it was necessary for him to have this power so that he could “stabilize domestic prices and protect the foreign commerce against the adverse effect of depreciated foreign currencies”.

The Fed took a backseat

During this period, the president, Congress, and the Treasury took charge of monetary policy, while the Federal Reserve took a step back and did what the federal government told it to do.

The plain and unvarnished fact is that the Federal Reserve System of today is not the one established 20 years ago, any more than it is the system which existed a year back. The present organization has been shorn of its power to formulate an independent credit policy and it can no longer regulate the flow of funds into and out of this country, as it did when the United States was on the gold standard. The Gold Reserve Act of 1934 not only took from the system all of its gold, but in doing so definitely deprived it of future control over gold movements, although of course that power had been lost as a result of the gold embargo and subsequent monetary manipulations. With the passage of this act, therefore, the central banking system of this country formally surrendered one of the chief privileges and duties which it had exercised prior to suspension of gold payments. … The Administration has assumed responsibility for defining our monetary policies. (Washington Post February 17, 1934). source here

The Roosevelt administration’s policies regarding gold and dollars were both controversial and consequential!

You would likely agree that Roosevelt’s gold policies were aggressive. There were many critics who asserted that the policies were “completely immoral” and “a flagrant violation of the solemn promises made in the Gold Standard Act of 1900.” Critics argued that the policies would cause massive inflation, which would trigger a speculative boom and eventually end in a depression. Instead of helping the country, critics felt Roosevelt’s policies would make economic recovery harder by frightening and confusing people.

Some economic historians eventually came to a different conclusion. For example, Milton Friedman and Anna Schwartz felt that the policies accelerated America’s recovery from the Great Depression. In 1985, Barry Eichengreen and Jeffrey Sachs wrote an essay showing that economic recovery in the United States began at the time the gold standard was suspended.

As discussed, FDR’s gold policies severely weakened the link between the dollar and the gold. There are arguments on both sides as to whether this was the right thing to do or not. It is up to you to dig further into this on your own and determine whether you believe weakening the dollar’s link to gold was a good idea or a bad idea.

In future posts, we’ll learn how the link to gold was eventually completely eliminated. But before we get there, let’s look at FDR’s second (perhaps less controversial) policy to end the Great Depression: the FDIC.