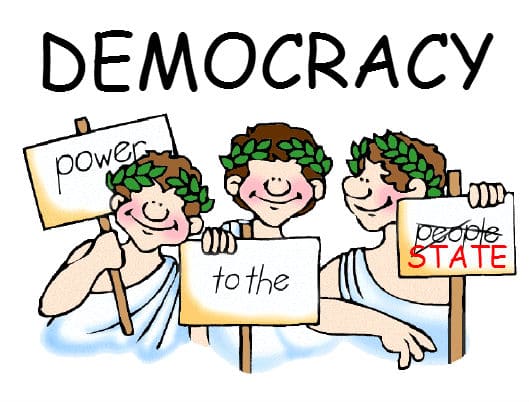 I feel like Bitcoin has some pretty interesting philosophies about democracy that are baked into the consensus model. So I’m curious to hear your thoughts on democracy and then the intersection between blockchain and democracy, and then democracy on a blockchain.

Ancient Greeks invented democracy. They invented it under some very specific circumstances. 3000 land owning, slave owning, white males got to decide for themselves… and the 150k slaves, women, and children whom they owned as property. That’s democracy.

I don’t believe in Democracy. Democracy is 51% of the population having the ability to decide to kill the other 49% because they’re inconvenient… Homosexual, Jewish, whatever.

Democracy without restraints, without human rights, civil rights, constitutional protections is a brutal system of oppression, where once you get that sliver of majority, you can eradicate everybody else.

Strictly speaking that’s what democracy is.

Now, most people have constitutional republican democracies, parliamentary democracies, and other means of sweetening that system a bit, to ensure the minorities don’t get oppressed. How well does it work? I don’t know.

Bitcoin isn’t a democracy. Not even in the mining. Bitcoin is a system of super majority consensus, when it takes a very large percentage of the deciding groups – the 5 constituencies of consensus in order to make change… which makes change very difficult. It is 5 because they all need to work together: software developers, miners, exchanges, wallets, merchants.

Bitcoin is a system that decentralizes power radically. Politically, many people call that cypherpunk, crypto-anarchy… other words we don’t get.

Bitcoin is redefining political and organizational systems. Not just bitcoin, open public blockchains. This technology born out of the internet and expressing some of the radically egalitarian open philosophies, a free flow of information: freedom of speech, freedom of association on the transnational basis that transcends not just borders, but every aspect of identity, without identity.

That’s a radical new political system. It started with the internet, it’s now happening to money. And we don’t yet have good words for it.

Some people might call it democracy. I don’t think that’s what it is. Democracy in developed worlds mostly  today is a system of hierarchical and Institutional organizational principles, that was born out of the era of industrialization in the 18th and 19th century.

So hierarchical systems are failing. Flat, network based, collaborative, decentralized, adhocracies on the internet may be the new thing. Who knows? It will be fun find out! So I’m along for the ride.

What is the structure of a consensus we are looking for here?

We don’t know yet. We’re finding out. And here’s the interesting thing: We have layers of this.

All of that noise, doesn’t change the bitcoin consensus rules. At the end of the day, It’s going to play out under Network protocol, with nodes that are participating, that express the economic interests of their users through choices about which set of consensus rules they use, on their live systems and with their transactions. So money on the system, choices of the software you use, choices of the software you mine with if you’re a miner. All of those things in the undetermined.

Talk is cheap in a lot of this. People will say anything. At that last moment, when “push comes to shove” and you see that the consensus rules are moving one way… you know, you stick your finger in the air and you detect which way the wind is blowing… and suddenly your very sacred principled opinions go straight out the window, and you follow your pocket.

Because you can be right and you can be wrong, but if you break the consensus rules, you are poor either way! And that overriding economic, practical game theory that plays out on the network overrides everything else… People may say one thing and run different software. They may signal they want one thing and then execute something else. They may hold on until they start losing a lot of money, and then change their minds.

We don’t know how this is going to play out. We’re going to find out – hopefully in a not too disruptive way. We may end up with camps taking their own paths. I don’t like that particular solution for bitcoin, but some others do. Either way, we will come up with some solution that will work when other stop working.

Finally A Simple Explanation: What is blockchain, Bitcoin, Mining, and Altcoins
How Long Until We Have Bitcoin Mainstream Adoption?