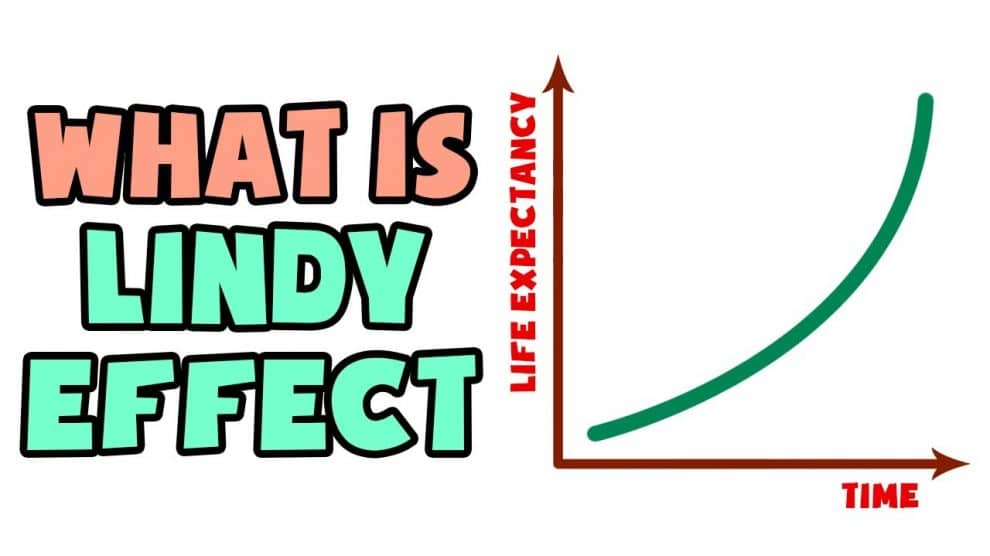 The term Lindy Effect was most likely made by Albert Goldman in 1964 article he had written in The New Republic titled “Lindy’s Law” when he referenced Lindy’s delicatessen in New York where comedians gathered to discuss their careers, and the idea emerged that the more past exposure you’ve received – the more future exposure you’re likely to get. Note likely – so we are talking about the odds here, not certainties.

This is contra-intuitive because we are mortal beings, and we know that something alive will die some day. We use the logic – if something is longer time being here, the higher chances are that it will be outdated or replaced by something else. Think of it as Aging in Reverse or the idea that something or someone that has been around for a long time will most likely continue to stick around.

More recently it was popularized by Nassim Taleb in books such as Anti-fragile but an important distinction arises. Nowadays The Lindy effect refers to non perishable things like idea and technology because they can stand the test of time despite the changes in society.

For example gold. Gold which has been considered valuable for thousands of years, and will most likely continue to be perceived that way. Also old book which remained relevant for decades or centuries is good example. The chances are that old book will more likely stay relevant than a book that became relevant this year. Another great example is classical music. It is higher chance that people will in the future continue to listen Mozart Bach and Beethoven and not Justin Bieber or Lady Gaga.

So we are talking about inertia here… If something is considered useful and valuable for very long time, the chances are that it will keep being valuable in the future as well.

Word of warning: One past performance does not guarantee future results! It may be improbable that people stop considering gold valuable, but it’s not impossible.

The next thing on which you should pay attention is that Longevity on its own loose metric. Rocks around you are older than everything and no one gives a shit about them.

A lot of people, primarily Bitcoin maximalists are representing The Lindy Effect as very important aspect of bitcoins value. They are saying something like this: “Ha! You fool that hold that shitcoin, it will go to zero! B b b because it is new and unproven! And bitcoin is…”

“And bitcoin is proven?” I think in myself. What makes it more proven over that “shitcoin” over there? Bitcoin just has more speculators network effects, which became religion, that is all.

I think that bitcoin maximalists are in this case prematurely referring Lindy Effect to Bitcoin simply because it has not been around long enough. Decade old is too young to talk about Lindy effect. It has not had a chance to prove itself that it can stand the test of time despite changes in society. I agree that it is true to some extent, for example older cryptocurrencies have advantage in that they have been battle tested in real life conditions, and are operating well with successful track record and established history. But that is not that big or important advantage, as bitcoin maximalists are trying to represent.

At the same time, noob to the crypto space-like thinking that bitcoin is “old dinosaur-like tech” which will be replaced is also wrong… if something does not go fundamentally wrong of course… which I think it will, but that is the different topic.

The same reason why people do not upgrade to the new Operating System immediately when it becomes available, they will not start using newer, “better” cryptocurrency. They will wait to make sure it is bug free, that major vulnerabilities are patched out etc… and they will just wait out for someone else to have trouble, report it, and then work with support and devs to fix that. People want to be sure that their money is safe with these cryptocurrencies, and odds are in favor that older cryptocurrencies are safer than the new ones.

It is true that older cryptocurrencies have first mover advantage, and they had more time to acquire network effects about which we will talk in the next session, but my opinion is that it is too early to talk about the de facto Lindy Effect. The future cryptocurrencies will have to do a lot of catching up with the new ones to even become close to the same level of trust that the old cryptocurrencies gained.

But it is also important to note that being the first mover has advantages, has also disadvantages. I think that there is lot of truth in the saying “First to market, first to fail” and there is even a book on that https://papers.ssrn.com/sol3/papers.cfm?abstract_id=906021

There are many historic examples where early dominant player was overthrown, and I came to conclusion that until technology matures enough to lead became relevant, lead is not that important. Let’s see some famous examples of first mover which failed: Yahoo, Nokia, MySpace. Do I need to continue?

Something being very old (or better expression in this case OLDER) is not guarantee for anything! 200 year old bank can fail, right?

Same is with mining: resources spent on bitcoin mining does not add value to it, like many picked up from bs bitcoin maximalist bias. Maximalists are claiming how bitcoin will always have value just because transaction fees are spent on it. Well, probably more fees are spent in that 200 year old bank that failed.

Or the reason why bitcoin will always have some value is because electricity power was spent on mining. On the same token, bitcoin maximalists are explaining how Bitcoin is actually energy storage because of proof of work process through mining. How does that make any sense I wonder? You could with the same logic conclude that bitcoin is energy storage in the same way that shit is food storage.

Please do not listen to superbiased bitcoin maximalists. I have explained why they are doing that in this post. In short, the more buyers who believe in bitcoin religion they attract, the heavier their bags will be.

After all, if Lindy Effect is so powerful and in place, then fiat money is way older than bitcoin, and has much higher chance to continue existing as before, and because of that bitcoin’s existence does not make much sense.

Why Is Bitcoin The Poison Pill Of Global Finance?
How To Protect Privacy When Bitcoin Is Traceable?