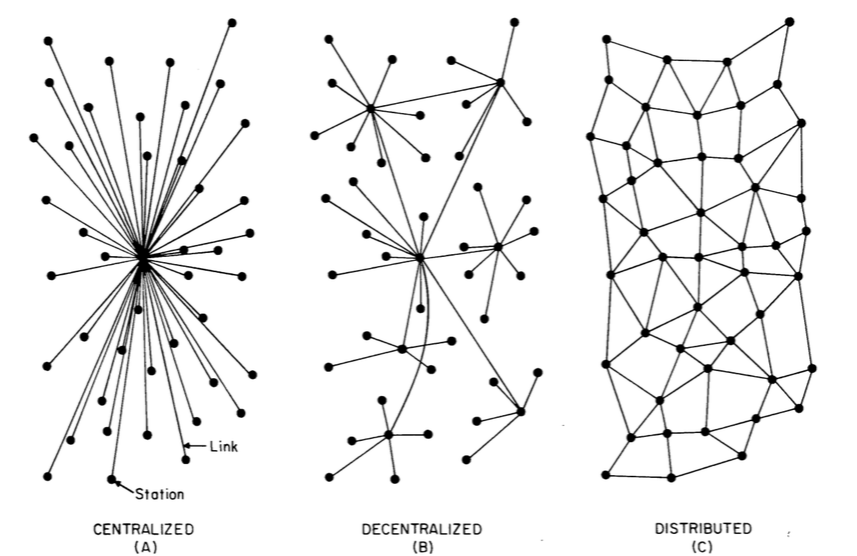 We’re almost there, folks! The moment you’ve been waiting for is nigh. In the next lesson, we’ll jump into the Bitcoin whitepaper and start learning the ins and outs of how it works.

Before we get there, though, we need to spend a little time understanding just the basics of what P2P networking and distributed systems are. It won’t take long, trust me!

In its simplest form, a peer-to-peer (P2P) network is created when two or more computers share resources directly, without needing to rely on a central computer to distribute the resources.

This is in contrast to the typical “client-server” model, where individual clients request resources from centralized servers.

The precursor of peer-to-peer networks was USENET, which was developed in 1979. USENET allowed users to read and post messages and news onto a forum (similar to online forums today) without relying on a central server. Instead, USENET worked by copying the same message/news to all the servers in the network.

But it wasn’t until Napster was invented in 1999 that the concept of peer-to-peer became popular and widely used. Napster was a popular p2p music-sharing application that allowed people to distribute and share music. You probably know, Napster eventually got shut down due to copyright infringement. Musicians weren’t happy about their music being shared without permission.

A peer-to-peer system that is designed to achieve a certain goal is a type of “distributed system.” A distributed system involves a set of distinct processes (e.g., computers) passing messages to one another and coordinating to accomplish a common objective (i.e., solving a computational problem).

Simply put, a distributed system is a group of computers working together to achieve a unified goal.

Why does this matter?

Well, because a blockchain is a type of distributed system, where independent nodes around the world are communicating to send and secure Bitcoin transactions. There is no centralized server that verifies and secures the transactions. It is all happening in a distributed manner.

Alrighty, folks, we are finally ready to learn BITCOIN! You’ve patiently followed all the lessons up to this point, and now they’re about to pay off. Let’s get started with the Bitcoin whitepaper.

I’ll see you there 🙂

The Rebels Who Started The Cypherpunk Movement