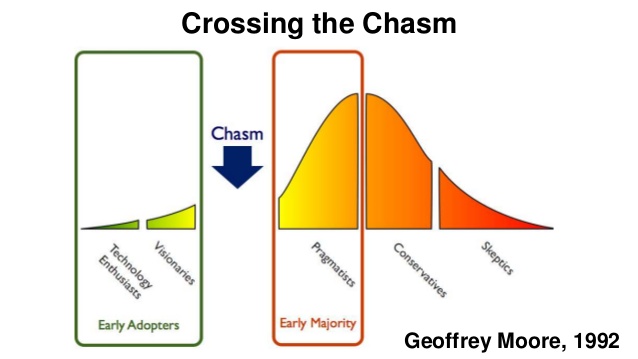 The shift in start-ups promoting Bitcoin adoption to "blockchain for enterprise." What needs to happen in order for mass adoption to occur? The most important factor in entrepreneurialism is timing; you have to wait until the density of adoption allows you to set up a market. One-sided and two-side markets. Two-sided markets are much easier with online commerce. Facebook as a physical radius bootstrapping, small focus group example. Real vs. theoretical or ideological need. You're not going to see the bootstrapping of Bitcoin as a retail payment application among affluent, connected, banked people; first we're going to see many of the unbanked dealing with problems. The biggest application today, outside of basic infrastructure, is remittances. 2.5 billion people around the world have zero access to banking, and 4.5 billion have limited access. Going through many complex steps to keep 15% of their money is worth it.

I have a question regarding usage. In recent years, there has been a shift in the start-up community, specifically among Bitcoin start-ups trying to push adoption and usage of bitcoin, to promote use of Bitcoin as a payment system. In the last few years, we have seen that shift over to “blockchain for enterprise” etc.

I’m convinced that bitcoin is a great currency, with great social and economic value. What needs to happen for that “hockey stick” curve of adoption we have been wanting and waiting for in the last years?

I think what we find with entrepreneurialism in general, is the most important factor for a start-up is timing. We saw this with the early Web and internet companies. In 1998, some people said “Let’s deliver supermarket food via the Web!” Those companies failed, pretty badly in fact.

But that doesn’t mean the idea failed. The idea happened and worked 15 years later, and the reason is because you need to wait for a density of adoption, to allow you to set up that market.

There are different types of markets: one-sided, two-sided, and many-to-many. Let’s think about that for a second.

What is the primary application of Bitcoin which has succeeded so far? Speculation.

How many people does it take for someone to speculate in Bitcoin? One person, the speculator.

So speculation is a one-sided market; it is almost a zero-sided market because you only need one participant. That is the Bitcoin’s most successful application (so far).

Now if you want a two-sided market, then you need buyers and sellers simultaneously present, in the same vicinity with access to bitcoin, or the desire to own bitcoin, and that is harder to bootstrap.

But if you try to do that at your local bakery and there are only three people in a 5 mile radius who have bitcoin, and one bakery in a 5 mile radius that wants bitcoin, you don’t really have a market, right? You will just have frustration. So that market takes a lot longer to bootstrap.

Remember when Facebook started, how they won globally when they launched on the first day? Do you remember how everybody signed up? Oh no, I am remembering it wrong. That is not how Facebook happened.

Instead, what they did was they went to Stanford and picked one building, and knocked on everybody’s door until everybody in that one building signed up on Facebook, and Stanford was the only place you could do it. Once that was successful, they got five more buildings, and soon they signed up the entire campus.

So now when you went to Stanford, everybody you knew was on Facebook. It was useful now because it had density. They bootstrapped the market by creating a product for a small focused group.

Then they went and expanded… to other campuses. You are going to see this happen with Bitcoin and any other successful cryptocurrency. You can’t just bootstrap a retail market on the first day and say: “Hey, we accept bitcoin! It is just our bakery, but WORLD, come visit!” Nobody shows up.

We will not going to see those types of retail applications. Part of the reason is this: Do you have a debit card? Maybe I should have asked this the other way around: Do you really need bitcoin? No, you don’t. Not to shop at the bakery. You have cash, credit cards, bank accounts, tap-to-pay, swipe-to-pay, Venmo, PayPal. Apple Pay Samsung Pay blah blah blah… You have everything.

You may still claim how you need bitcoin, but that is because you understand it ideologically, which is very different from “my children will starve, I can’t send them to school. My generation’s wealth is being destroyed by my government.”

That happened in Greece, twice in my lifetime. That happened in Yugoslavia. It happened in Argentina. People there lost everything. In Venezuela, if you talk about bitcoin, they know why because they need it, and to them it is not theoretical at all.

What do you need for bitcoin adoption? Well, you need it to be needed. To have applications that are needed.

The basic application of paying, is application that is needed by 4.5 billion people around the world who have very little or no access to banking, and can’t do cross-border transactions, or can’t without paying enormous fees. I don’t think any of them are reading this blog post. That is the majority of the human population, but it will take a decades to bring this technology to them.

Do you need bitcoin if you live in a country that is suffering from hyperinflation, a banking crisis, currency controls if you try to get money out, and your government you know, occasionally throws people out of airplanes because they disagreed with them? Yes. All of these things happened in Argentina in the last 20 years. They get it.

We will not going to see much bootstrapping of bitcoin for retail payments among affluent, connected, and banked people.

First, we will see many of the unbanked dealing with some very difficult problems they have. In my opinion, the biggest application today, other than basic infrastructure (exchanges, wallets, cross-border transfer systems, and internet service providers for bitcoin basically), other than that is remittances.

Remittances means that if you are an immigrant, and you are sending money home to your friends or family, Western Union will take 9% as their cut, plus 3% on the exchange rate spread, plus another 5% in the destination taxes and fees and transmission… then you need Bitcoin. Then Bitcoin is difference between you keeping most of that 17% of your money, which is a tax on poverty and immigration.

Those people will go through the most ridiculous steps to acquire and use bitcoin.

You tell them: “Listen, there are 22 steps to set up a bitcoin wallet and you must read this very complicated manual. “You won’t understand almost any of it.” They will say: “To keep 15% of my very scarce wealth? Sure, I will do it now.”

In comparison, if you tell someone in Paris: “Listen, next time you buy your morning coffee and croissant, instead of just tapping with Apple Pay, read this manual and go through 22 steps, and then you will have bitcoin! And the world will be a better place!” They will respond: “You are crazy! I don’t want more hustle in my life!”

We need to understand who the audience is; they are very difficult to be seen from this perspective because we assume that people have other options that we have.

The truth is, 2.5 billion people in the world have ZERO ACCESS TO BANKING. They live completely in cash and barter-based societies.

4.5 billion people have very limited access to banking, in a single currency, with no ability to send or receive money across borders, or only with very expensive fees, and very difficult requirements.

In the United States, 18% of the population has no bank account, which is 60 million people. You thought it was less. Many of those people are undocumented immigrants, others are poor people who lack documentation, others are people who would probably be arrested for simply trying to walk into the bank, because of how they look.

If you are homeless, illiterate, disabled, or completely uneducated, and you go into a bank, it is a terrifying place! You are not going to be able to figure out how to open a bank account.

That is the reality for 60 million people in US. In France, it is actually a bit higher than 18%.

But go to the places like the Philippines, Indonesia, or Brazil, we are talking now about 75% of people who are unbanked.

That is where bitcoin will succeed, in my opinion.

Are Blockchain Splits A Governance Failure?
Can Government Kill And Destroy Bitcoin?